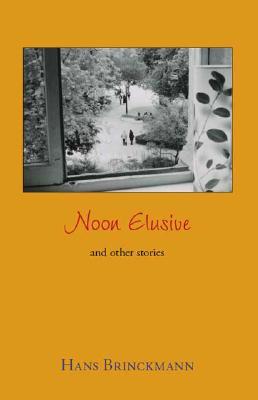 This is a cosmopolitan collection of stories - about an American in Paris, a Balkan parachutist, a New York heart surgeon, an English undertaker, a Dutch diplomat in Tokyo. What they have in common is that they are all in the throes of personal crisis - mild and manageable, or severe and harrowing. They dream of escape and new beginnings.Noon Elusive is about a London-based American architect in his late 50s, nagged by his English wife. He escapes to his tiny Paris flat where he feels accepted as he is: a genial oddball, still dreaming of pursuits sublime and futile.

An assignment from British Rail to redesign the station lavatories becomes the battleground between the pressure to conform and the lingering rebel in him.In The Parachutist, an unconscious paratrooper lands behind enemy lines following a botched jump. The woman who finds and hides him comes from the same Balkan-like country, but she is a Dissident opposed to the Regime that launched the war.

They are drawn to each other, but only after they part does she learn the terrible truth about him.The Trade-Off Man explores a New York cardiac surgeons bizarre attempts to overcome the effects of his orthodox Christian upbringing by inventing a method to make the right choices in life.

His system entangles him completely, but the disastrous results lead to his eventual redemption.In Way Out Blues an English undertaker famed for his macabre innovations keeps telling himself for 25 years that he performs his duties purely as a matter of duty, and that his soul is not involved. Until he finally breaks away...Twice Upon a Plum Tree explores a Dutch diplomats ambivalence about a Japanese womanhe once loved when he meets her again after 30 years but does not recognize.

Comments
Comments for "Noon Elusive and Other Stories":